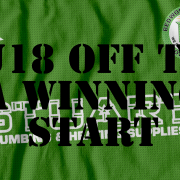 With the Midland floodlit youth league season being null and void the league have put together a Champions League type of competition with the final being played at the end of June.

The Greenbacks U18s Youth Team have been placed into Group D with:

The 8 group winners will then go into a knock out competition with 4 quarter finals being played and the competition will run from there with the winners receiving the Ray Mercer Memorial Shield.

The young Greenbacks got off to a winning start last night against a strong Rugby Town side running out 4-3 winners in a hard fought game.

The Bedworth lads got off to a flying start, Chris Jones with a first time finish, Cameron Dunne then made it 2 with a left foot strike from the edge of the 18 yard box assisted by Warwick Hurst, Rugby Town got a goal back to half the deficit Bedworth then extended their lead to 2 with a 30 yard screamer that flew into the top corner from Warwick Hurst.  Rugby were then awarded a dubious penalty which goal keeper Owen Betteridge saved comfortably to his right. The Greenbacks then went into a 3 goal lead with Chris Jones getting his 2nd of the evening assisted by the unselfish Cameron Dunne making  it 4 -1.  Rugby clawed their way back into the game on the stroke of half time from another corner to make it 4-2 going into the break.

The second half didn’t live up to the first in the goal mouth action as both defences stood firm Rugby did manage to score a third to make the last few minutes nail biting for the Greenbacks but it was to little to late and the final whistle went to give all 3 points to the Bedworth lads.

A definite game of 2 halves with the attack for both teams running out on top in the first half but defences stood firm and claimed the second half.  Manager Lee Hurst commented after the game “It was a tough start in the competition for the lads against a good Rugby Town side who have been able to carry on training through the lockdown due to them being an academy side, Our lads have had 2 training sessions since we have been allowed back and to show the resilience and effort that they put in tonight just showed the character of the lads we have here in this youth team squad, It was disappointing to concede from 3 set pieces but as I have said we have only had 2 training sessions and its not something we have had the time to greatly work on.  Both Coaches and myself were impressed with the first half display from the whole team and as a unit we defended well in open play.  We scored some great goals and to see them shared throughout the team just goes to show the talent in depth we have here.”

Bedworth U18 host Stratford Town next week and will be looking to make it 2 out of 2 in their quest to top Group.