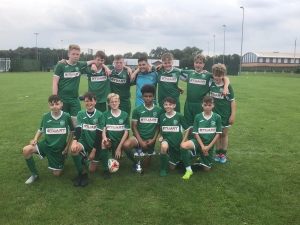 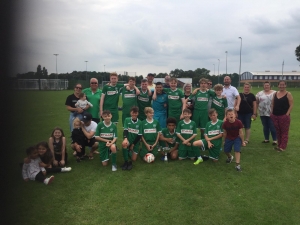 The under 14’s won a tournament in Leicester organised by Allexton Youth Park FC.

playing teams from Leicester, Solihull , Birmingham & Nottingham the lads stormed through the groups winning every game & conceding only one goal.

The quarter final was played at a furious pace but we proved far to strong winning 6-1.

In the semi we played Allexton who were hosting the event , a much closer game but we deservedly went 0-2 up but then conceded a late goal but held on for a deserved win.

The final was against Blaby & Whetsone and from the first whistle we were very dominant the opposition had no answer to our attacking qualities & a resounding 7-0 victory saw the Greenarmy lift the trophy.

A huge well done to all the lads done the club proud & themselves.