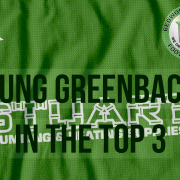 Young Greenbacks find themselves in the top 3

Just over the midway point in the Season its worth looking at some of the successes we as a club are currently experiencing.  With the first teams push for a playoff place taking shape that is not the only excitement to be had around the club.

Lee Hurst has done a fantastic job since taking on the YOUTH TEAM, they are currently sitting 3rd in their league with the majority of their squad being first year players so the future for them is looking
extremely bright.

The U16s in the MJPL are doing really well currently sitting 8th in a league of 66 having only lost 3 games all season, Liam Moore and Brian Allton have done a brilliant job this season with the U16’s baring in mind they are playing full academy sides in their league and little old Beduff sitting 8th is a massive achievement.

The majority of our Junior teams play in the Coventry and Warwickshire Youth League and some are doing extremely well.

The U16s are currently sitting 3rd in the C league having not lost a game so far this season. After finishing 4 th last season they have built on that and are looking good for a top 3 finish. With the coaching team of Mr “always happy” Alan Tyler and Brian Sanderson they always look like they are enjoying their football and with the enjoyment comes results.

The U15 Lions currently sit 1st in the A league of their age group, after finishing second bottom last season the lads have developed and results show. I would like to say that its because of my expert coaching but in truth it is down to the application of the lads themselves with some having the motivation to go out running and train under their own steam it just goes to show how much some of these lads want to progress in the game.

The U15 jnrs have bounced back from a poor season last time out to be sitting 1 st in the B league with an unbeaten record, Ben Thackeray has done a great job in lifting his team after the disappointment of relegation last season they are looking dead certs to get back into the A league and that will give us 2 U15 teams in the highest echelon of junior football in the county.

The U14s are another one of our junior sides who are currently unbeaten winning all 9 of their league games so far leaving them sitting 1 st in the B league at their age group. Under Martin Jones, the team have grown in stature and have climbed up the divisions and no doubt will be looking at taking the silverware this year and then taking the A league by storm next time round.

The U13 Jnrs led by Dean Wainwright and Mark Allton are currently 2 nd in the B league of their age group and will pushing for promotion come the end of the season as either champions or runners up. After finishing mid table last season they have kicked on to where they are now.

As you can see the future for Bedworth United is bright with all these teams sitting in the top 3 of their respective leagues the chances of one of these players coming through the ranks to play in the first team is extremely high.  All of this hard work is done by volunteers and its not just a case of a players dad saying “I have watched match of the day for 30 years I can manage a kids team” all of these coaches have done a minimum of their FA coaching level 1, Safeguarding courses and Emergency Aid all of this is undertaken in their own time.  Its not just a couple of hours a week of turn up for training then Sunday turn up for a game. All sessions have to be planned, team sheets completed, results entered online, games confirmed, referees booked, find sponsorship all this and more before you even get a football out.  As a club we have a coach mentor who is there to help these coaches and guide them not in how to coach football but to mentor them in how to deal with players and most importantly parents.  We have a Welfare team made up of 4 welfare officers to deal with any issues that may arise, these welfare officers not only deal with issues that young people have around football they may be the first port of call for anything going on in a young person life.  All of this again is done voluntarily for the club by a willing few.  All of this goes on in the background before a football is even looked at let alone kicked.

Now imagine the scenario of one of these players who has been here since they were 7 breaks into the first team then gets snapped up by a league club and gets sold on for a bit of money (E.g. Jamie Vardy).  All that time for that coach then becomes worth it for the club.  That is why as a club we are now looking a lot more at the juniors, looking at players that could play up an age group to test them.  That is why you might see Stu Storer, Jamie Lenton or Andy Penny taking a junior session.  If we as a club can spot the talent and keep it here early then that is a must.  So when you see the junior managers tip your hat off to them as without them the future of football not just at Bedworth United but in this country would not be as good as it is.

If you want to get involved with Bedworth United Juniors or have a child who wants to play then please get in contact.