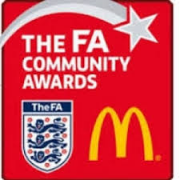 Terry Steptoe tonights finds out if he is grassroots footballs volunteer of the year.