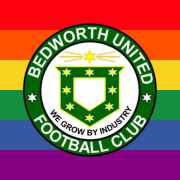 It’s June, it’s the month of pride, and as LGBTQ+ people come together to celebrate the community’s culture and hard-fought for rights, Bedworth United Ladies Football Club have this message:

“Be you, do you, celebrate you. We are proud of every single player in our club at all times, no matter what their sexuality”.

Paying homage to the celebrations, three of the club’s players talk about their experiences of being LGBTQ+ within the team.

For Lydia Hackney, the club’s supportive network helped her become more confident in being herself.

“Regardless of your sexuality, everyone is accepted and there is a relaxed atmosphere with the girls”.

Amy Preston adds to this, saying the club empowers players to not only wear their shirt with pride, but to stand proud as an LGBTQ+ player.

“Whether you’re a player, coach, manager or volunteer in the game, the inclusion of every person is vital in growing and moving the game that I love, forward. Even though we are all different, we are all one team, and we are proud to be who we are”.

Freeleigh Parnell says that the club’s support has helped boost his confidence and pride in being pansexual and transgender.

For Parnell, this hadn’t always been the case. Despite successfully being accepted into some former football clubs, he was later asked to leave after being honest about his sexuality and who he was.

“I quickly found out there are people who can’t and won’t accept other people for their differences. Sadly, these people held me back in some of my dreams”.

Like so many others in the LGBTQ+ community, Parnell also faced bullying at school and coupled with a vicious attack that left him in a coma, he was left struggling with his mental health.

Fortunately, Parnell can now say he is proud to be himself and finally feels accepted by others.

“Being part of Bedworth United Ladies has helped me stand strong and brave because I have a supportive team with amazing managers and coaches”.

Bedworth United Ladies say they will continue to offer an open and supportive network of players and management alike.

“We promise to be a diverse and supportive place where all individuals can bring aspects of themselves without fear of being judged. We want to strive towards allowing players to reach their full potential and continue to create an environment where everyone feels comfortable and confident in themselves, and most importantly, proud”.

The Ladies are Recruiting!
Scroll to top