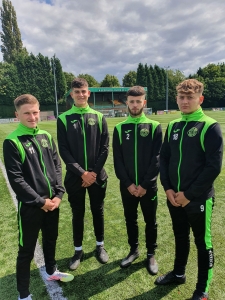 Bedworth United welcome the first of many students to the new academy Daniel Moore, Lewis Allton, Cameron Dunn and Ciaran Whelan have all signed up to be a part of the future of the club.  All 4 have came through the junior ranks at Bedworth culminating in playing for the successful Under 16’s in the Midland Junior Premier League last season finishing 6th out of 74 teams. All 4 made appearances for the Youth team in the Midland Floodlit league. All 4 of them have been sought after by academies within the local area and we are happy that they have chose to stay here at Bedworth United to progress their careers.

Daniel Moore, Dan is a Goalkeeper with great potential to progress in the game attracted interest already from a lot of league clubs and will be a great acquisition going forward for the club.  Great shot stopper and commands his area brilliantly for someone of his age.

Lewis Allton, Lewis is technically very good plays normally as a holding midfielder but gets forward and usually pops up with a few goals every season.

Ciaran Whelan Fast centre back left footed great tackler played for Bedworth the last 4 seasons and has been a great addition to last season U16’s.

Jamie Lenton first team coach said “Having players of this quality sign up for the Academy can only be good for us as a first team, we have identified these players from a very early age and to watch them develop through the age groups here at Bedworth is extremely positive.  It goes to show that the junior coaches here at Bedworth are all doing a great job in nurturing and identifying talent and bringing it to the first team management teams attention.  These 4 are not the only players we have eyes on we have identified at least 3 or 4 at every age group that we want to keep a look out for it just goes to show the progression routes that Bedworth have in place for young players.  With the inception of the new Academy it means that the club can keep an even closer eye on these players whilst they are gaining worthwhile qualifications. We will be inviting these 4 to join in the pre season with the first team and hopefully develop them further”

Apply Here
Tweets by bedworth_united
Bedworth Add to Their Squad