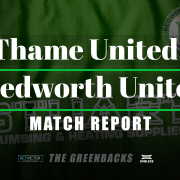 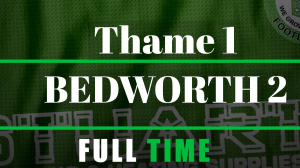 Saturday saw Bedworth travel down the M40 to visit the ASM stadium to take on Thame United.  Bedworth were without the suspended Luke Rowe after his red card against Halesowen in the FA Cup draw at The OVAL and with Tom Sharpe also absent due to injury Stu Storer had to shuffle his pack. The squad was bolstered though with the return of Ricardo Dudley and Richard Blythe. Returnee Dan Crane started in goal with Cal Templeton making his second full start for the Greenbacks the depth of the squad was on show.

The game started as you would expect with 2 teams looking for their first 3 points of the season with neither side really stringing much more than 3 passes together and the ball spending most of the time like a pinball in the middle of the park.  Both teams had half chances with Blackmore blazing over from distance and then putting his next shot from near enough the same spot a foot wide of the Thame goal, West went close for Thame after wriggling free in the box but blazing over from about 14 yards out.  It was Bedworth who would break the deadlock though when on the quarter of an hour mark the busy Bailey Nichols robbed Murray midway inside the Thame half and drove into the home sides box and shot from 12 yards out left of centre across the keeper to put the ball just inside the far post to give Bedworth the lead.  Both Bailey Nichols and Piggon had chances to double Bedworths lead with Bailey Nichols going close with a shot on the turn which just sailed over and Piggon broke the offside trap but the Thame keeper saved bravely at his feet and then Essex did very well to stop the rebound with a goal line clearance.  Bedworth went into the break with the slenderest of leads with everyone watching feeling they should have been further in front.

Thame came out in the first few minutes of the second half looking the more menacing of the 2 sides but lacked the final ball to test the vocal Crane in the Bedworth Goal. Hackett for Thame clattered into Josh Steele and after the referee consulted with his linesman was only shown a yellow which all of the Bedworth bench seemed to think was a let off.  Chester and Steele wide on both sides were causing the Thame full backs problems and delivering crosses which Bedworth could not connect with.  One ball into the box was looking to be met by Essex for Thame with a diving header, which unfortunately he missed and instead headbutted the floor and required treatment. The game then got a bit niggly with both sides committing fouls and the referee starting to dish out yellow cards.  It was Bailey Nichols again though robbing Lynn this time of the ball and just like the first half when he did the same to Murray he advanced into the Thame box but just as he was about to pull the trigger Lynn brought him down with a tackle from behind, the referee had no hesitation in pointing to the spot and the Thame players didn’t question the decision as there was no doubt in anyone’s mind except the one Thame supporter holding a baby who decided that he would question every decision no matter what.

Troke calmly stepped up and buried the ball to the keepers left to double Bedworth’s lead, with 17 minutes left on the clock Bedworth still looked like they would maybe score more, they thought they had when after good work from Templeton who found Steele who in turn found Troke whos shot was saved  by Hill, Piggon pounced on the rebound to put the ball in the net but was foiled by the linesmans flag.  Thame went straight up the other end and a long shot stung the hands of Crane who could only parry the ball out to Gledhill who fired the ball back past crane to half the deficit.

The game then got really scrappy with Bedworth looking to play for time and Thame looking to push forward for the equaliser with the referee adding 5 minutes on at the end it was ultimately Bedworth who walked away with the 3 points.  On the balance of play they deserved it with both sides coming into the game winless it was never going to be a classic it was more about the win and who could hold their nerve and ultimately it was the Greenbacks who were stronger.

Watch what Stu Storer had to say after the game