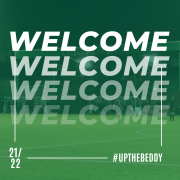 Bedworth United Ladies are pleased to announce two new additions to the management team. As the club look to grow and achieve their ambitious goals, it was evident that the management team needed to expand. Paddy Richards, first team manager, said “these announcements come at a very exciting time for the club as we start a new journey”.

Can Kale comes into the club as first team coach and will bring a wealth of experience he has built from coaching in other countries as well as the UK. His attention to detail really stood out to the current staff and in the short time he has been with us on the training pitch, he has already made little changes which will hopefully make big differences when the new season gets underway.

Kale was informed of the role by one of our current players and he was very interested to find out more so when he spoke with Paddy initially he had a huge interest in the project here at Bedworth United. He aims to take some stress away from the current coaches, “I can take lead on training sessions and help give the players advice and new tactics for the new season”.

Billy Osborne, currently in post with Liverpool Feds Women, will begin his role as development team manager at the start of pre-season once finishing his current duties. He will bring in excellent leadership skills for our young development squad which is what is needed as they face another tough season ahead. Current manager Annie Zaidi, will step into a head coach role and the pair of them will focus on developing the players both mentally and tactically, preparing them for the challenge of the new season.

Having spent the last 5 years away from his hometown, Billy is excited to start this next chapter in his coaching journey at Bedworth United and said “the clubs a massive pull for me being my hometown club so it fills me with pride to put on the badge and something I’m looking forward to”.

All at Bedworth United FC would like to wish both Kale and Billy the best of luck in their new roles.

A word from the Gaffa
Scroll to top