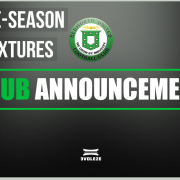 The Greenbacks start their preparation for the 20-21 season with a visit to Midland Football League side Ashby Ivanhoe.  Ashby Ivanhoe were in 14th place when the 2019/2020 season was stopped but that league position isn’t a true reflection as they had a whopping 6 games in hand on most of the other teams in the league so no doubt would have placed higher had the season reached a conclusion.

Next up will be a midweek game away against Lichfield City FC.  Lichfield play in the Midland League Division 1 and were placed 5th when the season ended last time out.

The following Saturday will see us on the road again with a short trip to Sphinx Drive to face off against another Midland Football League side in Coventry Sphinx.

Then we have our first home game of the pre season and they don’t get much bigger when Premier Central Nuneaton come to visit The OVAL.

After the visit of Nuneaton we face off at the OVAL against Rugby Town with 2 more away games at Coalville and Droylesden that sees us ready for the season ahead.

*ALL FIXTURES SUBJECT TO CHANGE

Catch up with Luke Rowe
Scroll to top