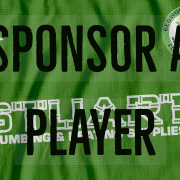 As the season is fast approaching it is time to start thinking about which player you want to sponsor this year.   For just £60 you will get your name in every matchday programme, a photo signed by the player, your name mentioned on twitter and the website, Complimentary ticket for one league game for you or a friend and your name on our supporters wall.

We have numerous other sponsorship opportunities available to suit all budgets if you want to show your support.

If you want to sponsor a player either ring the Stadium Manager on 07927 686792 or email stadiummanager@bedworthunitedfc.co.uk with your choice of player.

U8s get much needed support
Scroll to top