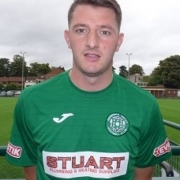 We are happy to announce that 28 year old Richard Blythe has agreed terms to re-join Bedworth United from his season away at Rugby Town.

Blythey was a first team regular in our promotion season and was club captain for a time, Rich in his time here was a fan favourite always giving 100% showing some nice touches on the ball and is a great addition to the dressing room, as a youngster he won the FA Youth cup with Aston Villa and appeared for Wales 5 times at Under 19 level.

His senior footballing CV covers Rushell, Barwell and Cov Sphinx. When he was 14 he had trials for Athletico Madrid in the same team as Antoine Griezeman but was unfortunate in that he found it difficult learning Spanish at such a young age and was released.

Get your football fix
Scroll to top