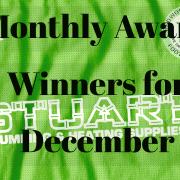 With a lot of junior fixtures cancelled due to the weather and the junior teams having a Christmas break Decembers player of the month award has gone to a member first team.

Decembers player of the month is Elliott Parrott

Elliott has led by example this month with solid displays in every game he has played.  He has been invaluable in both penalty areas scoring for set plays in the opposition box and being a rock in the heart of the defence in our own box.  Elliott regularly comes across strikers who want to bully him but the amount of headers he wins and attacks he breaks up putting his body on the line to defend the Greenbacks goal is testament to his style of play.  Being the Captain Elliott isnt the loudest on the pitch but he leads by example and others around him pick up their game from the example he sets.  Well done Elliott may we see you in a Green shirt for years to come.

Decembers Volunteer of the month is Ryan Murphy

Most of you won’t know who Ryan is or what he does but Ryan is an integral part of the clubs match day hospitality team.  He meets and greats the match officials and the oppositions officials and hosts them superbly during and post match.  Although young in years he has shown a maturity when volunteering his time at the club.  Many opposition clubs this season have commented on how efficient and helpful he is when they visit The OVAL and a few have wanted to steal him away but he has a friend in Andy Penny who wont let him go anywhere.  We hope that Ryan continues to volunteer for many years to come.

If you feel that you could add anything to the club as a volunteer then please approach a member of the board or myself as the club would not function without the amazing volunteers we have.