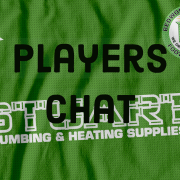 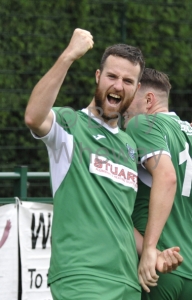 Today I managed to catch up with Mitch Piggon and put a few questions to him.

A.  I would probably say the FA trophy win against Ilkeston,  I thought it was one of our best games of the season, we were brilliant that day.

Q.  Worst moment of the season?

A.  The fact that it come to an end early, we were on a good run going into the back end of the season and I felt we would of got into the playoffs.

Q.  Funniest Moment of the season?

A.  Got to be sockgate someone nicked Blytheys socks right before kick off, he’s lost his head and the Gaffa wasn’t happy we won the game actually and had a bit of a laugh about it after.

Q.  Best moment of your career?

A.  As most Greenback supporters would know scoring in the play off final the first year Bedworth got promoted, another one I also finished top scorer in last seasons FA Cup joint with another lad on 9.

Q.  As your in charge of player fines who hands over the most to you?

A.  You can always count on Blaize and Lynus for some money them pair do everything together and are guaranteed to be late at least once a week,  definitely on away games it seems that they have trouble telling the time.

A.  Without a doubt Prezzo. He is always good for a laugh, he will whack the minibus windows as we are reversing and Andy Penny will always jump thinking he has hit something. In general that lad is a fruitcake and always joking around.

A.  I would have to say myself, terrible in training couldn’t hit a barn door.

Q.  Who chooses the music and is it any good?

A.  Khaellem usually jumps on the sounds.  Some of it is OK but the majority sees the lads all looking at each other thinking what the hell is that.

A.  Has to be Pazza he loves a check/denim open shirt over a white tee shirt, wears that whatever the occassion.

Q.  Who would you want to be stuck in a lift with and why?

A.  Go to be Craney or Blythey always gauranteed a good story when it comes to football.  I could have picked anyone really as the whole group is good.

Q.  What have you been doing to keep fit during the lockdown.

A.  Ive been out road running (Despise it) I have a bike at home which I have done a bit on.  Cant wait for everything to open up again to vary what I am doing, missing football so much hopefully we are back soon and have a good go next season.  Stay safe everyone.

Mitch is expecting his first child early mid July and all at Bedworth wish him and his partner congratulations and look forward to welcoming another member into the Bedworth family.

Thankyou to our Sponsors
Scroll to top