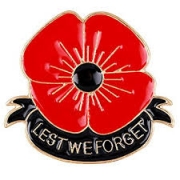 For those of you who read the program you would have seen that for this weeks first team game against Bedford my around the ground page was changed and I penned my personal experiences of how the Royal British Legion and Help for Heroes had assisted me.  With the time of year and the day that we remember those that have given the ultimate sacrifice being today.  Please just take a moment to read where the money that is collected goes and how much it helps.

For those of you that know me well and I class as friends will know how hard it was to write I spent ages writing, deleting, writing, deleting.  Since the program was published I have been asked by numerous people to copy it to the website. If anyone wants to make a donation after reading my words then please just place it either in the collection tins at the bar or come and see me.  Please remember though that its not just this time of year that people need support so if you have that 25p left after buying a cup of tea on your training night or that 15p after buying a pint on match days just think about putting it in the collection tins on the bar as every penny does help.