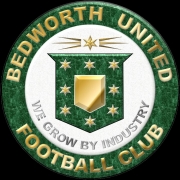 Sunday saw us step up to our first season at 11v11 and against a tough side in Firefighters.

In the warm up the lads were up for the fight and were putting the ball in the back of the net in practice.

Bedworth got the game underway and started the stronger team, putting firefighters under pressure. The lads were moving the ball well and creating chances, then Kayne was put through down the left and he put in a great ball into the 6 yard box where Oskar was able to put it past the keeper 1-0 Bedworth. We continued to control the game until around the 20th min when we seemed to lose our way and they turned the table putting us under pressure. They were getting a lot of the ball but not much in the way of shot, until they got 3 corners before half time and could have scored with all of them. We were not following our players giving them free headers on goal, luckily for us they were just over. They did have a good effort on goal just before half time down the right and firing a shot in from a tight angle which Tom dealt with pushing it over the bar. Then it was half tome 1-0 to Bedworth.

In the team talk we got it into the lads to keep going not giving them time on the ball and to follow our players keeping tight marking when there attacking.

Firefighters got the 2nd half underway they started where they finished the first on the front foot. The lads were doing a better job of stopping them and we then broke with Phin playing a ball through the back line for Kayne to run on to and slotted it past the keeper at the near post. 2-0 Bedworth against the run of play. Firefighters never gave up and came at us hard wanting to get something out of the game. They got a corner and we just didn’t follow our men again and they made it count this time 1-2.

The lads tried to step it up but just could not get time on the ball to play it around and they managed to get another from nothing putting it over Tom into the net 2-2. We were throwing it away and it was then they got a free kick on the edge of the box down the right, thinking they were going to cross it in, the lads just struck the ball into the top of the net 3-2 Firefighters. We had about 5 minutes to get back in it. We were trying to get the lads going and we nearly got a equaliser when Kayne ran into a through ball and from the edge of the box hit his shot beating the keeper but only for the cross bar come the there aid. So it finished 3-2 a good game end to end but should have got at least a point. We will learn from this and go again next week.

Goals from Oskar (1) Kayne (1) and man of the match Lennon, great defensive performance.
Next up Leamington at the Oval

CHANGE OF FIXTURE
Scroll to top