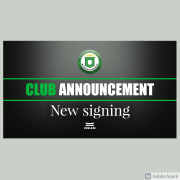 Stuart Storer today has added a new addition to his squad we can confirm that Philip Bilson (No relation to own Paul Bilson) has joined The Greenbacks subject to league approval.

Philip is a 22 year old predominantly defensive player who enjoys defending and has joined us from  GnG Oadby.

Bilson is a former Chesterfield academy product who has played his trade with Mansfield Town FC where he has played at both reserve team and under 21 level.
Bilson also spent a short spell on loan at Corby Town.

Phil is a really talented young footballer who has a bright future ahead of him with time on his side he will make a strong addition to the squad to furthermore our progress as a team , Phil trained really well this week and will be available for the FA trophy game against St Neots on Saturday”.