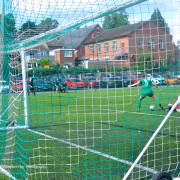 The Posh Roll Out Winners at The Oval

The Greenbacks lost 5-1 at the Oval to newly promoted Peterborough United at the weekend. A quick flurry of goals by the visitors secured the win, and a place in their club’s history books. The Posh got off to the perfect start with an inch perfect through ball, to their player who takes it round the keeper and nestles into an empty net in the first minute of the encounter.

Bedworth responded well to such an early setback, with multiple efforts on goal. The one particularly of note skimming the cross bar after a wonderful run from Kirsty. The Greenbacks had much more of the possession, but the Posh maintained a consistent threat on the break. That is how the score stayed until the 48th minute when Kirsty equalised after a scramble in the box, and she made no mistake in sticking it home. But the Posh regained the lead on the 60 th minute finished off a lovely cross into the box. Punishing Bedworth for not taking the multiple chances they had made for themselves. It didn’t get much better for the Greenbacks with Peterborough’s number 9 setting the standards with a seven minute hat-trick to seal the win.

Bedworth hope to better their performances with a trip to Leafield Athletic for an 8pm Kick Off.