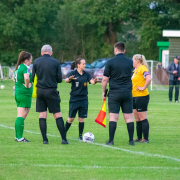 Bedworth fall to defeat at Leafield despite producing a battling away performance.

On a cold evening at Dickens Heath Sports Club, Beddy found themselves on the wrong end of a five-goal thriller. Kirsty Farnsworth and Jodi Hunter both found the net for the Greenbacks, but it was a hattrick from Leafield’s number seven that ultimately decided the contest.

Bedworth showed no signs of a hangover from Sunday’s defeat to Peterborough and made a bright start to the game with Charlotte Taylor firing a third-minute effort just wide of the mark. The hosts quickly responded with two efforts of their own – one being tipped wide brilliantly by Emma Dell – before Beddy completed an end-to-end first seven minutes by drawing first blood.

Jodi broke into the Leafield half before threading a lovely through-ball into the feet of Kirsty who made no mistake after her initial effort was saved. Kirsty showed great reactions to latch onto her saved shot and rifle home the rebound and give Bedworth the lead. This early goal sparked an impressive 25-minute period for the Greenbacks in which they dominated possession and created chance after chance. With nine minutes on the clock, Alice Bates danced through the Leafield defence and forcing a save from the goalkeeper. Five minutes later, Kirsty almost had a second, but her powerful drive was parried away. Beddy were agonisingly close to a second goal on 15 minutes later, as Jodi was flagged offside before finding the bottom corner.

The half hour mark in the game saw Leafield grow into the game as they began to carve out chances of their own. A curling shot from outside the box flew just over the bar, before Emma was on hand to keep out another effort.

Leafield’s pressure finally told in the 42 nd minute when number seven latched onto a through-ball and slotted underneath Emma to level the affair.

Following the interval, the hosts picked up where they left off in the first half and completed their comeback in the 49 th minute. Number seven was released down the left-hand side and made no mistake with a near-post finish to put Leafield ahead.

Bedworth were inches away from an immediate reply, Kirsty’s dipping volley two minutes later falling just wide of the post. The Greenbacks continued to press for an equaliser but were caught out by a quick counter-attack as the home side made it 3-1 on 61 minutes. Number seven was played in on the edge of the area and curled a finish into the bottom corner to complete her treble.

Conceding against the run of play stoked a fire throughout the Bedworth ranks, and the Greenbacks launched a subsequent offensive on the home goal. Whalley saw her effort turned behind by the ‘keeper before Sophie Wilson’s header from the resulting corner was cleared off the line. Beddy were frustrated once again just a minute later, as the ‘keeper pulled off a spectacular save to keep out Whalley’s powerful volley.

Bedworth were eventually rewarded for their perseverance in attack as Jodi headed home with five to go. Alice floated a free kick into the metaphorical ‘mixer’ and Jodi found space to loop a header into the bottom corner to give the Greenbacks hope.

Leafield took up a defensive approach to see out the game and Beddy were just unable to break down their walls and find an equaliser.