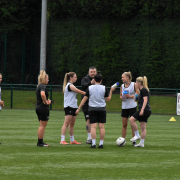 A late goal from Lydia Hackney wasn’t enough for the Greenbacks to secure their first point of the season.

Bedworth made no changes off the back of their 1-0 loss away to Long Eaton at the weekend, setting up in a 4-2-3-1.

It was a bright start from both sides, with Jess Price being the noticeable threat for the visitors. Her consistent runs beyond the defence being a thorn in Bedworth’s side. Her persistence paid off, when on the 15th minute, a through ball from Doncaster’s number 10 split the Greenbacks defence who rounded the keeper and slotted home.

There was a decent reaction from Bedworth with Kirsty going the closest with a shot that was neatly turned behind by the keeper.

Against the run of play, Doncaster double their lead with Doncaster’s number 9 getting her second of the game. All the work coming from the Belle’s Saxton who manages to round Emma in goal and passes to Price who has an open goal.

Just shy of 40 minutes gone, the ball is crossed into the box from the left-hand side, causing a scramble from Doncaster’s defence, which dropped to the feet of Jodi Hunter who couldn’t miss and halves the deficit.

Bedworth were agonisingly close to equalising on the 45th minute mark with Kirsty Farnsworth managing to twist her body to put an improvised overhead kick just over the bar. They went into the break trailing.

Doncaster started the better of the two sides at the beginning of the second half: with Emma tipping Price’s header over the bar. They made another chance for themselves as Saxton misses a near open goal – a let off for the Greenbacks.

Doncaster’s substitute, Khan made an impact off the bench causing Sophie problems, who was now in net after Emma had to be stretchered off following a collision on the 66th minute. The ball dropped kindly to Khan who stroked home with thirteen minutes remaining.

On the 85th minute, Bedworth fans and players were given hope when Lydia, the centre half thumped the ball home with a bullet header across the Belles keeper.

Unfortunately, hope was short lived when the referee blows the whistle for full time. The Greenback’s fall to defeat at the hands of the Belles, losing 2-3.