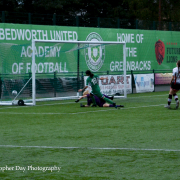 Bedworth United Ladies were hoping to begin the season with a win against Boldmere St Michaels Women. The Greenbacks were missing a few key players for this match, along with the first team manager.

They got off to a dream start however after a couple of scares from Boldmere, with the Greenbacks number 19, Kirsty slotting home after a defence splitting off the ball run, and the finish to match.

Unfortunately, the lead only lasted a quarter of an hour when Boldmeres powerful number 9, rounded the keeper and slotted home. Just sixteen minutes later, Boldmere took the lead with a smashing finish from just inside the box.

The Greenbacks went into half time trailing 2-1.

The second half was more of the same, with Boldmere having the better of the chances, and scoring straight away after the restart. A little after the hour mark, Boldmere’s number 9 gets another goal, and a hat-trick for her on the opening of the season. Boldmere continued their dominance with their number 9 grabbing a fourth for herself, and a fifth for them. The Mikes went on to score another three with the last of them being a beautifully caught shot into the bottom corner, leaving no chance for the keeper.

The Greenbacks are in league action again this Sunday, playing Peterborough at The Oval with kick off at 2pm.