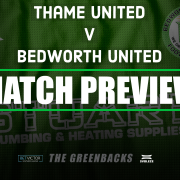 Bedworth visit Thame United on Saturday looking for their first 3 points of the season after a disappointing week losing away at Barton then exiting the FA Cup after a replay against high flying Halesowen . Thame have struggled early on this season and like ourselves are sitting on a solitary point but have played a game more in their last outing on Bank Holiday Monday they were beaten 3-0 by Kidlington and the Saturday before they managed a 3 – 3 draw against Spartan South Midland Prem side Leighton Town.  Bedworth will be looking to bounce back after their poor start to the season.

Stu Storer should have a full strength squad to choose from with the only injury doubt being Ricardo Dudley who had to have his head glued after receiving an elbow in Saturdays FA cup game against Halesowen.  The squad will be bolstered by the return of Richard Blythe and also the return to The Greenbacks for Dan Crane who will be pushing Mondays man of the Match Adam Harrison for the number 1 spot.

I caught up with Jamie Lenton who stated “We haven’t played them before my time at the club so they aren’t an outfit we have a lot of prior knowledge and information about there are a couple of names in the squad that ring a bell but otherwise they are a bit of an unknown quantity.  With both teams having only secured 1 point so far this season it is a must that the players go into the game fully concentrating on the task ahead and not be thinking about Tuesdays game against Corby. Obviously going out of the FA Cup was disappointing especially in manner which we played during the replay after such a good game on the Saturday but the players have been told that we want a reaction after that, we have prepared well so lets see what happens.”

For all other information on Thame please click the link below

Re scheduled Game
Scroll to top