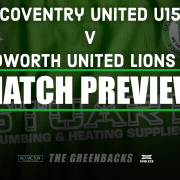 Bedworth travel to the Massey Ferguson Sports Ground on Sunday for the first round of the Bedworth and district Nursing Cup to face Coventry United from the B league.  Cov Utd finished joint fifth in the league last season with a record of 6 wins 5 draws and 7 losses and amassing 23 points.  The last 2 times these teams met was at U13 level with Bedworth running out 6-0 and 3-0 winners,  There are 9 players still with the Lions who took part in those fixtures.  The Lions have a couple of injury doubts for the game but should have a full squad to choose from apart from the long term injuries we have.

Coventry United won their first game of the season 3-1 against Counden Court Red and will no doubt be up for the game, historically Cov United have had a good ethos in the style of play they have and look to play football at every opportunity.

Games like this can always prove difficult so early in the season especially as the higher placed team with teams not fully in the swing of things yet this could be a banana skin but the boys will be ready and we are looking for a couple of good cup runs this season both in this nursing cup and the league cup.  If we progress through this round the winners will face Bedworth United Juniors.  The lads will be desperate to progress to face the old enemy and fingers crossed have bragging rights for the season again.  Before they get that chance though they have to be professional and not be complacent against a Cov Utd side who will also want to progress.

Bedworth United MJPL U15 v Allscott U15
Scroll to top