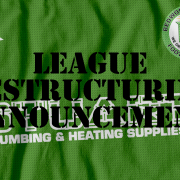 With the Leagues restructuring which was announced today Bedworth United have been entered into the NORTHERN PREMIER LEAGUE – MIDLANDS DIVISION where we will be joined by:

Chairman Neill Rayson-Randle said after the announcement “This is good news for the club we are happy with the teams around us and with less travelling it will be better economically for all the clubs within this new league reducing travelling costs over the season.  Hopefully it will encourage more supporters from all teams to travel to away games and therefore raise the footprint of non league football across the midlands region”

Manager Stu Storer stated “As the new league announcements have just been revealed at 3 pm today I was so pleased that we have been placed into the new Northern Premier League Midlands Division. This is great news for all connected with the football club in so many differing ways.
This decision is a relief as there could have been quite a bit of travelling in the North West Division, but fortunately being placed in the new league has reduced this time-consuming travel prospect massively. Obviously, we are moving from the Southern section to the Northern section but I am delighted we have been placed in a Midland Division with many tasty games against more local clubs. It is going to be a tough and challenging league but I am thoroughly looking forward to the up-and-coming season now the restructuring of the leagues has been sorted, as we can forge forward with our plans.”

On the whole there is positivity around the announcement and planning for the 2021-22 season can start now.