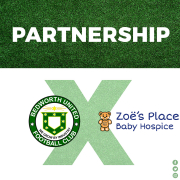 The charity – a children’s hospice that marks its 10 year anniversary this July – provides care for babies and infants with potentially incurable or life limiting illnesses.

Bedworth United Ladies players and supporters are being encouraged to raise funds by taking part in upcoming events being held by the foundation. These include The Mudnificent 7 in August, and the Scafell Pike Trek in September, and many more.

Manager Paddy Richards expressed his delight at the partnership: “With Bedworth United being a community football club, we feel it’s important to support a charity like Zoё’s Place in any way possible. We look forward to working with the charity over the next few years and hopefully we will raise a lot of money with the ideas we have.”

Fundraising ideas from the club are largely welcomed and suggestions can be emailed to ladies@bedworthunitedfc.co.uk.

For more information on upcoming events and how you can support the charity, click here.