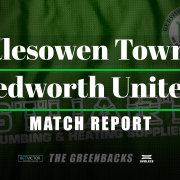 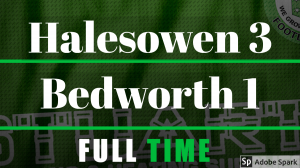 Bedworth bow out of Cup with a whimper

Bank Holiday Monday saw The Greenbacks travel to Halesowen to replay their FA Cup tie after drawing 1-1 at The OVAL on Saturday.

Stu Storer was without Ricardo Dudley due to the head injury he sustained in Saturday’s game and also missing was Richard Blythe due to a long term commitment.

Halesowen mixed up their side with the notable omission of former Greenback Montel Gibson.  It was the home side who started the stronger with the influential Molyneux running things for them and within the first ten minutes he had tested Harrison in the Bedworth goal. Bedworth though weren’t without their chances winning a couple of  free kicks around the box but unfortunately the delivery was poor and the chances wasted.

It was that man Molyneux who broke the deadlock though as he did on Saturday.  Bedworth though went straight up the other end from the kick off and won a free kick dead centre inches outside the box which on another day with luck on our side could have been a penalty when Piggon was dumped to the ground, Rowe though could only find the wall this time and couldn’t repeat his quality from when he scored from the same sort of position against Barton.  Things went from bad to worse when Harrison and Sharpe had a mix up and allowed Molyneux a free run to put the ball into an empty net and double Halesowens lead, Bedworth did huff and puff with a couple of decent crosses into the box but the majority of the play for the rest of the half was mainly with Halesowen who could have been further in front going into the break had Harrison not been alert to save well shots from Lucas and Wright for Halesowen.

The second half started with Halesowen having the majority of the play looking to kill off Bedworth with that all important 3rd goal. Molyneux was unlucky not to complete his hat trick when a shot from distance was just pushed onto the bar by the fingertips of Harrison. This was the story of the first 20 minutes of the second half with Harrison showing what a good goalkeeper he is with saves both from distance and at the feet of Halesowen players. It was though that man Molyneux who would get that all important 3rd goal when he was allowed to run across the edge of the box and then cut inside and fire past Harrison from 8 yards out to all but kill the tie off.

Bedworth did get a late consolation goal when substitute Pryce picked the ball up and ran at the Halesowen defence and finished well from a tight angle to at least give the travelling support something to cheer about.