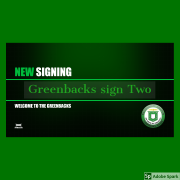 First a returning face to The OVAL sees LUKE KEEN don the green jersey once more, he has played at Coleshill finding the net 9 times in the league with limited starts and is a proven goalscorer at this level.  Luke can include Redditch, Rushell, Daventry, Rugby and Atherstone on his footballing CV and has always been amongst the goals wherever he has played.  He scored 16 in the 2017/18 season   Welcome back from all here at Bedworth United and good luck in your second stint in the Green shirt.

Secondly we would like to welcome OLLY MULDERS to The OVAL.  Olly started his football career with Birmingham City and was a gradute of their academy being given a one year pro contract.  Most recently he has been plying his trade at Redditch United.  Olly is a promising youngster who will look to thrive under Bedworths management team.  We wish Olly good luck and success as he pulls on the Green jersey

Both players will be available for Saturdays Game away at Biggleswade.