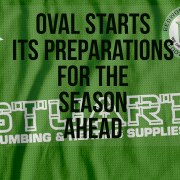 Its not just the players here at Bedworth United that have to go through a rigorous pre-season, the pitch does as well and today that preparation has started with 3 ton of crumb (them annoying black bits of rubber that get everywhere) being layered into the pitch.  The common misconception that 3G pitches are just laid and that is the end of it is far from the truth. 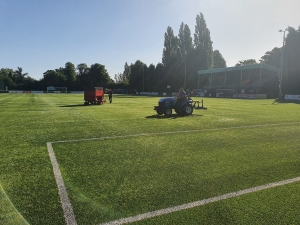 Pitch Maintenance at The OVAL is possibly more rigorous than there is with a grass pitch.  Just some of the daily tasks that are needed to be completed include; Litter clean of playing surface and surround, Treating any new weeds, moss or algae that have appeared, checking the seam lines & white lines and a general cursory inspection.

3 times a week the pitch is brushed using a specialised brushing machine to lift the pile and redistribute the rubber crumb this includes brushing the perimeter and redistribution of the rubber crumb to the central playing surface area, the brush direction has to be alternated weekly to ensure that the pile of the pitch is not flattened, removal of all organic debris so that seed pods from trees do not germinate on the pitch.

Every couple of months measurements have to be taken especially in goal areas and heavy play areas ensuring on average 10-12mm of fibres are showing during this time any small rips tears or major wear issues are noted and a contractor comes in to repair the areas affected.  I am sure some of you noticed last year the change in colour of the surface where the left foot is planted next to the penalty spots this was because the carpet was getting worn and had to be replaced.

Yearly we have to have an independent inspection from FIFA approved contractors who check the bounce of the ball is true, the roll of the ball is consistent across the whole pitch. They also check for any major flat spots that have developed over the last 12 months.  Once this for want of a better word MOT is passed The OVAL pitch is then approved and placed on the FIFA list as an acceptable surface to play on.  This all comes at a cost, the crumb that has been laid today costs just over £3000,  The annual inspection cost is just over £2,800, this has to be completed before the start of each and every season before a ball is kicked in anger. 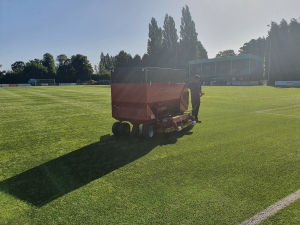 You might not think that walking across the pitch in your flat shoes causes an issue, but it does, it crushes the fibres and compresses the crumb creating flat spots on the playing surface and then effects the roll of the ball.  Chewing gum is the kryptonite of 3G pitches it sticks the crumb together and sticks to the fibres and when removed cause the fibres to rip out yet again creating flat spots. Mud transferred from boots to the pitch allows and aids the growing of weeds again in time effecting the roll of the ball along the surface of the pitch.

So next time one of the staff here at Bedworth catch you walking away from a training session leaving a bottle or litter on the pitch, catches you walking across the pitch in incorrect footwear, turning up with muddy boots or spitting your gum please listen to what they say and stop and think about the effect your having on the pitch and the time and money that has been spent on ensuring you get the chance to play on the best surface possible.