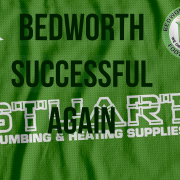 The Birmingham FA We’re looking for the positive parent from the side-lines or the team of parents that go over and above to consistently give both teams the best match day experience. We want to know all about those who make respect an important part of what they do in grassroots football in your community, and who inspire others to behave positively.

The judging panel reviewed the applications based on the following criteria:

– Signed up to The FA Pledge Of Positivity

– Team is within an FA Charter Standard Club

– Demonstrates they have made a positive impact from the side-lines

Ford was nominated by the Under 15s Manager Martin Jones, Martin wrote “His attitude and positive thoughts,comments to the players before and after games, taking on other duties like refereeing, social events and fundraising; the list is endless. In the 9 seasons that ford has been with me we have never had a disagreement in regards to the team. He calls me especially when he knows I am down or not myself.”

Ford now gets entered into the national awards and we wish him luck and hope he is successful.

The club would like to congratulate Ford on his award and would like other parents to follow Fords example and embrace the FA respect campaign and who knows next year it might be you who is winning awards.

This award is Bedworths 3rd annual award Ford now joins an elite club with Martin Jones himself winning Grassroots coach of the year last year and Terry Steptoe who was last years grassroots volunteer of the year.

If you think someone around the club goes above and beyond to ensure that grassroots football thrives here at The OVAL then keep an eye out around the start of next year for the nominations and please nominate them.

On a national level, there are 11 categories. That’s because The FA take the opportunity to celebrate one of the winners from across the 10 national winners – a winner that exemplifies the true spirit of grassroots football in England. This is the prestigious Bobby Moore Award, and the winner is chosen by our national panel.