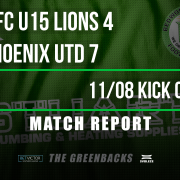 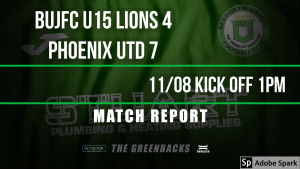 The Lions were thrown straight back into action after having a 2 week break with a very tough game against Phoenix united from the Central Premier.

Phoenix have been brushing teams aside in their league winning games regularly by double figures so for a first game back after 2 weeks off it was always going to be difficult.

The game was played over 4 20 minute quarters so that both teams could trial new set ups and ideas.

The game started quiet evenly with both teams having good possession but no real cutting edge but it was to be Phoenix who drew first blood when Bedworth gave possession away cheaply in the midfield the ball was slid in between the Bedworth centre back and left back to find the run of the Phoenix forward who slotted the ball well into the far corner of the Bedworth net.

It wasnt long though before Bedworth equalised when a corner into the Phoenix box caused chaos with the ball bouncing off the bar the post and being blocked a couple of times before (via the underside of the bar) Travis managed to get the ball across the line. It was then Bedworths turn to take the lead when a ball played into the box found Kyle who’s neat little flick beat the keeper to put the greens 2 – 1 up.   It looked like that might be the score that we took into half time until a rash challenge on the edge of the Bedworth box gave Phoenix a free kick which was bent round the wall and just sneaked into the goal via the inside of the post to make the half time score 2-2. Bedworth should have easily been in front with the chances that they created on another day the young Greenbacks could easily have had 3 or 4 more goals but squandered some easy chances.

The goal just before halftime lifted Phoenix and it was to be the away side that took the lead when an easy goal bound effort was allowed to creep into the net this mistake seemed to upset the rhythm of the Bedworth lads and  another goal followed quiet quickly for Phoenix after a mix up in the Bedworth midfield with 2 of the Greens going for the same ball leaving a spare player who unchallenged strode forward and hit a shot from just outside the box to put the visitors well in the driving seat by 4 goals to 2. Bedworth though were still pushing forward and creating chances but just couldn’t seem to either hit the target or beat the Phoenix keeper with a fair few shots being straight at him. Eventually though it was Bedworth who got the next goal when a slick move was this time finished off by John P to bring the Bedworth boys back to within one goal of their opponents. Unfortunately the revival was short lived as almost immediately a challenge in the area that didn’t need to be made led to a Phoenix penalty which was duly hit hard into the top corner to maintain the visitors 2 goal cushion. Then minutes later to make matters worse a very poor clearance from Bedworth fell to Phoenix who again punished Bedworth and finished with ease to make the score 6 – 3 going into the last 20 minutes.  The Bedworth lads weren’t giving up and again after a great move involving 5 players the ball ended up with Kyle putting the ball into the net to make it 6 – 4 with Bedworth pushing forward it was Phoenix though who finished off the scoring when Bedworth were caught on the break allowing the Phoenix player to round Harrison in goal to finish well from a tight angle to make the final score 7 – 4 to the visitors.

If the individual mistakes that led to 4 of the 7 phoenix goals at key times in the game were avoided and had we converted the chances we made this scoreline could could have easily been reversed, We will put the mistakes and the poor finishing down to it being the first game back after 2 weeks off.

We still have 6 more pre season games to go before the start of the seasons so hopefully when the season starts we will have ironed out these individual errors and will bury the chances we are creating.

Meet Our Sponsors
Scroll to top