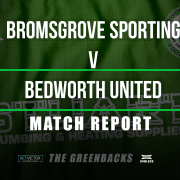 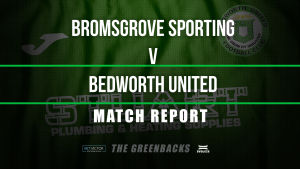 Bedworth travelled the 33miles to Bromsgrove with an extremely young team made up of mostly U21s.  The only recognisable names been Dan Crane, Lewis Chester, Josh Steel and Cal Templeton. The average age of the outfield players being only 19,  This was possibly the largest crowd that most of these youngsters had played in front of.  With Bromsgrove starting the same 11 as they did Saturday in their loss against Needham Market it was obvious that Bromsgrove were looking at this game to give them a much needed boost.

Both teams started nervously with neither really exerting much authority on the game.  Bedworths youngsters were holding their own against a much more experienced side.  The experience though came to the fore in the 18th minute when  Taylor who was going to prove to be a thorn in the Bedworth back 4s side all night muscled his way forward Crane saved well at his feet but the ball bobbled out to McDonald who put the ball into the empty net.  The Bedworth lads seemed to be effected by that goal after all the hard work of the first 18 minutes was undone.  Within 5 minutes that man Taylor doubled Bromsgroves lead after yet again his strength got him into the Bedworth penalty area and his angled shot beat Crane and just sneaked inside the far post.  4 minutes later Hayward was allowed to travel and hit a shot from just outside the box which beat Crane to make it 3.  The Bedworth lads rallied and tried to stem the tide but McDonalds speed and Taylors strength were just to much.  Taylor added a 4th and 5th in the 36th and 39th minute to complete his Hattrick to make the score 5-0 at half time.

Bedworth had a slight reshuffle at half time with the more experienced Cal Templeton moving into the centre to try to stop Taylor from using his strength.  The youngsters of Bedworth now knowing deep down that the game was beyond them started to relax more and at times played some good football, both teams could have added to the score but neither did the closest being a cheeky little lob from Chester that bounced off the frame of the goal leaving substitute keeper Brown stranded.  Crane had to make a couple of good saves one from a free kick and one from distance.  Neither team could break the second half deadlock so the game finished 5-0 to Bromsgrove and we wish them luck in the next round.

Bedworth took a young team (plus Dan Crane) for this fixture to blood some of the youngsters that we have around the club, nerves played a big part in the first half as most of the players on show have not played at this level yet.  The second half though showcased the young players that we have coming through the club with the U21’s and youth teams both doing well in their respective leagues the future for Bedworth United is in good hands and I am sure those who watched the second half especially would agree soon some of these lads will become permanent fixtures for Bedworth United in the future.  A lot of these are Bedworth lads and the attitude and desire they have to play for their home town is evident the youth and junior setup within the club is thriving and the blueprint we as a club have that many are trying to follow is proving to work.

See what Dave Cook had to say about his young Greenbacks after the game: