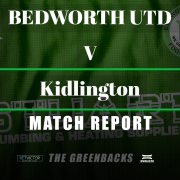 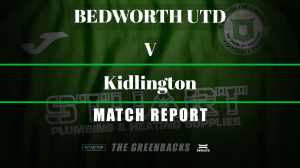 Bedworth travelled to Kidlington looking to keep their 100% record against teams from Oxfordshire this season intact.  It was Bedworths first ever visit to Yarnton Road and with Kidlington under new management it was a total step into the unknown.  With the stadium announcer first off calling us Bedworth Town and then managing to get Mitch Piggon confused with a pigeon already it wasn’t going great for Kidlington.

The game started with Bedworth straight on the attack within the first minutes Bedworth should have scored when first Keen had a shot blocked then Piggon and Finally Truslove had a shot cleared off the line after the ball bounced around in the Kidlington box.  Minutes later both the Bedworth players and bench were incensed after King  was upended in the box after cutting in from the left, the referee waved play on dispite the protests of those around him. The Bedworths bench protests woke up one of the small number of local supporters,  who then decided for the whole game his job was to question and disagree rather confrontationally with anything coming from the Bedworth bench.  I suppose he pays his money he can have a view.

Bedworth were by far in the ascendancy and most of the play for the rest of the first half was in Kidlingtons half with the home side only really having 3 attempts at Cranes goal all of which failed to test the Keeper as the either sailed high or wide.  Bedworth were by far the more positive of the 2 sides but were just unable to fashion a clear chance. With time ticking down in the first half Bedworth appealed for a second penalty after Lawrence in the Kidlington goal misjudged a cross and instead of making a connection on the ball made connection with Punters head. The ref this time agreed with the Bedworth appeals much to the annoyance of the previous mentioned Kidlington supporter.  With first choice penalty taker Troke on the bench Piggon stepped up to take responsibility but Lawrence made amends for giving the spot kick away when he dived to his left to palm the spot kick away.

Kidlington started the second half better than they did the first and looked to be more in the game than they had been before the break.  The game had lost some of its earlier flow with a succession of free kicks being given away by both sides.  With the ref showing a reluctance to issue any cards the challenges got more and more X rated.  One such challenge lead to Mulders for Bedworth getting knocked out and was down for a long time and resulted in him visiting the hospital to get checked out.  From the free kick Bedworth forced a corner which was initially cleared only as far as Mulders replacement Blackmore who’s first touch in the game was to put the cross back in to the Kidlington box inch perfect for Keen to head  past William’s to make it 1-0 and 2 goals in 2 starts since his return to the Greenbacks. What a first touch from Blackmore our very own ginger Messi.  With time ticking down a robust tackle from Tooke on Rowe which looked more like a clothesline and would have been more at home in a WWE ring saw both Bedworth players and bench incensed and after a short melee where the highlight was Dan Crane picking up Ricardo Dudley and carrying him away.  This was the only time the referee went to his pocket to produce a card in a game that could have saw a few. Yet again our local friend was not happy about the benches reaction to the foul.  With 6 minutes of added on time Kidlington were looking to put the pressure on and deep into that time Crane came to Bedworths rescue with a save down low to his near post to deny Kidlington an equaliser.

This win lifts Bedworth up to 7th place in the League 2 places and 6 points off the playoffs, with a couple of games in hand on Aylesbury who currently occupy the 5th place spot.

Man of the Match  Dudley

Watch the highlights of the game below