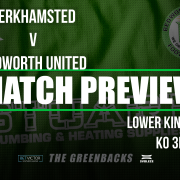 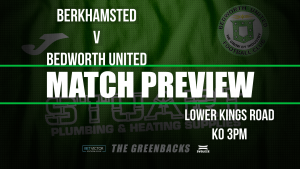 On Saturday Bedworth travel Berkhamsted to one of the teams who after 10 games have cemented themselves near the top of the league.  Berkhamsted so far this season have been unbeaten.  In the 10 league games that they have played winning 7 and drawing 3 and the joint top scorers with 29 goals.   Last time out they beat Aylesbury 2-1 at home and before that drew 0-0 with St Neots.

Bedworth will be travelling with a full strength squad after their narrow defeat in the trophy to Biggleswade they will be looking to carry on the good form of late in the league.  The Greenbacks league form has picked up of late picking up 10 points from the last possible 12.  A win for Bedworth could depending on other results catapult them within touching distance of the play off places.  After an indifferent start to the league campaign The Greenbacks seem to have kicked into gear and since October are one of the in form teams in the league.  With wins against Wantage, Kidlington and Didcot and a well earned draw against Welwyn Garden City the league table is looking a lot more favourable than it did at the end of September.

For those travelling tomorrow the Address is: