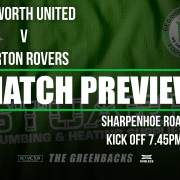 Bedworth travel to Barton Rovers on Tuesday night for their first away game of the campaign.

Barton finished 16th in the league last season and will no doubt be looking to improve on that this year, with a creditable 2-2 draw against Coleshill where they took the lead early on and then let it slip and needing an 87th minute Connor Vincent Penalty to take a point back.  All of that drama was only witnessed by a crowd of 70!!!!!

Stuart Storers squad came through Saturday unscathed so all of the squad will be available to travel the 66 miles to Bedfordshire.

Speaking with Jamie Lenton earlier he stated that “There is a bit of history between the 2 sides with Bedworth’s 1st promotion under the current management team’s reign coming after a 2-0 win at The OVAL against Barton in the playoff final, they have always been a threat going forward and its something that the team are aware of” He also said that “Away wins will be crucial this year to a promotion push so a good start away from home is always good to get and that is what they will be aiming for on Tuesday”

For those of you travelling to Barton the address for the ground is: