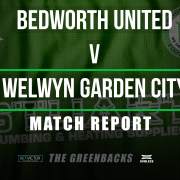 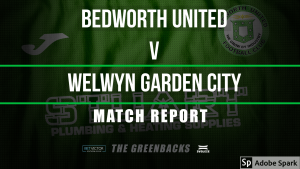 Bedworth faced off against Welwyn Garden City who were visiting The OVAL for the first time, knowing a win would move them to within 7 points of 5th place and a playoff spot.  The game at Welwyns Herns Lane ground way back in October was a hard fought 1-1 draw.  Welwyn started the game well nearly capitalising on an Elliott Parrott mistake but Taylor for Welwyn chose the wrong option and instead of giving the ball to managers son George Ironton who would have had an easy knock in blasted the ball at the advancing Crane and the big keeper saved Parrotts blushes This was the most action that Crane would see in the whole game as apart from a last minute shot that hit the bar this was Welwyns only other shot on target for the full 90 minutes.  Bedworth then started to play and gradually started to turn the screw on Welwyn and were forcing the Citizens back deeper into their own half and it only took 10 minutes before Bedworth took the lead when the influential Rowe took a pinpoint corner for Troke to run onto perfectly to nod the ball past Jones in the Welwyn goal.  Bedworth were puching for a second with Troke again coming close to doubling the Greenbacks lead.  With not long to go of the first half a long ball found Luke Keen, who was a constant handfull all game for the Welwyn defence, he got the better of Jay Rolfe in the heart of Welwyns defence and just on the stretch managed to lift the ball over the advancing Jones but there was just not enough power and the keeper got back to prevent the ball going over the line for Bedworths second.

Half time saw Welwyn make 2 changes in the hope of getting back into the game then 12 minutes later Nick Ironton had to make his third change when his son George was unable to continue.  The second half played out in much the same way as the first with Welwyn having a little bit of possession early on but failing to cause the Bedworth back line any real problems.  Just before the hour mark Luke Rowe was again provider this time he found himself in space wide out on the left and whipped an excellent cross into the box which Keen met about 15 yards out and guided a brilliant header past Jones giving him no chance.  Things then went from bad to worse for Welwyn when influential captain Walkilin made a block tackle and was unable to continue and with Welwyn already having used all 3 subs left them chasing a 2 goal deficit with only 10 men.  Bedworth continued to press but could not add to their tally with Troke and Blythe going particularly close.  Welwyn then in the final minute were unlucky to not get a consolation goal when with nearly the final kick of the game they hit the crossbar from a shot from 30 yards out.  The keeps The Greenbacks in 8th position level on points with Yaxley and 1 point behind Thame in 6th but with 2 games in hand them.  It looks like the 4th and 5th playoff positions will go down the wire but with performances like this Bedworth will be looking to claim one of them come the 25th April.

Man of the Match  Luke Rowe

Watch the Highlights Below