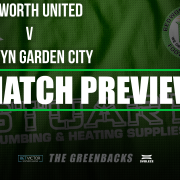 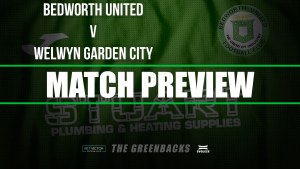 Bedworth welcome Welwyn Garden city to The OVAL in a game where both sides will be looking to gain 3 points going into the tail end of the season.  Welwyn currently in forth place will be looking to pull away from the chasing pack and The Greenbacks will be looking to close in on those promotion places.  The game earlier in the season at Welwyn ended in a 1-1 draw, with Bedworth taking an early lead through an Alex Troke penalty only to be pinned back 8 minutes later.

Welwyn last time out hosted Dunstable and after going behind early on beat them 3-1 previous to that they had a good win against Barton Rovers running out 4-1 winners. in the game before they went 2up gainst Thame only to be pinned back to finish 2-2 with.  Their record for the season is played 24 Won 14 Drew 5 Lost 5.  Welwyns boss Nick Ironton has been busy in January bringing in 3 new players for the run in so it will be a much changed side from the one we faced at Herns Lane in early October.

Bedworth will be looking to build on last weeks success at Wantage after controlling the game but going a goal behind they rallied well and ran out comfortable 3-1 winners with all of Stuart Storers attacking options bagging a goal.  The conditions had a lot to play in last weeks game with the ground not exactly great for playing football The Greenbacks did well to navigate what could have been a banana skin in their playoff push.  Bedworth will be bolstered by the return of Dan Preston who missed the Wantage game due to illness.  With everyone fit competition for a place in the starting 11 is heating up.  Bedworth will be looking for a much improved performance than in their last game at The OVAL where the struggled to get into the game against Dunstable.  I am sure Stuart Storer and the lads will want to make sure that that performance isn’t repeated on Saturday.  With still 14 games to go we aren’t quiet at the stage where these games are 6 pointers but its getting close.  Come along cheer the Greenbacks on and bring a friend lets make The OVAL a place that opponents fear to come.