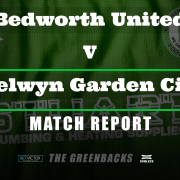 What a game to sign off for a month with.

Bedworth made numerous changes to the team that drew away at Kidlington with league top scorer Mitch Piggon and Dan Crane returning to the starting line up and new signing Andy Parsons making his debut for The Greenbacks.

Bedworth started well and looked lively in the opening exchanges moving the ball well.  Welwyn looked content to allow The Greenbacks the ball in their own half and were looking to catch the home side on the counter attack.  Bedworth although having the majority of the ball just couldn’t find a final ball and create any clear cut chances. With about 15 minutes played though it was a break down the Bedworth left which led to the opening goal when Kinoshi crossed to the far post and Templeton couldn’t sort his feet out and turned the ball past Crane to give Welwyn the lead in the most fortunate of circumstances.  Ten minutes later the away sides lead was doubled when a free kick from deep within the Welwyn half was hoisted into the Bedworth penalty area, The Greenbacks failed to clear and the ball fell to Vasey on the edge of the box who curled a shot round Crane to double the visitors lead.  Bedworth looked rattled and for a time it looked like Welwyn might run away with it with Crane doing well to keep out an effort from Buchanan and then coming smartly off his line to stop an advancing Payne.  It took until the final minute of the half for The Greenbacks to really worry Cross in the Welwyn goal when a cross from Dawson into the box could have gone anywhere off a Welwyn defender but to the away sides delight it went out harmlessly for a corner.

Bedworth started the second half much better passing and moving the ball a lot quicker than they did at anytime in the first with Jorrin John and Ishmael Dawson being a lot more involved than they were in the first and causing Welwyn trouble in the wide areas. Bedworth were looking more and more likely to score and the pressure eventually paid off on the hour mark when Parrott picked up the ball and drove at the Welwyn defence he was brought down just right of centre on the edge of the box.  Luke Rowe stepped up curled the ball round the wall and the ball nestled in the back of the net to give Bedworth hope and half the deficit.  Rowe was to be the saviour at the other end when on the break Welwyn broke free and a well struck shot beat Crane but the head of Rowe was there to clear off the line to keep the gap between the sides down to 1. The Greenbacks then started to pile on the pressure and with 8 minutes to go it was that man Mitch Piggon on hand to level the scores when another Luke Rowe freekick came back off the post and from 2 yards out Piggon couldnt miss as he put the ball into the empty net.  Welwyn thought they had retaken the lead when they had the ball in the back of the net but the Linesman flag was raised and The home support breathed a sigh of relief.  It took until the 3rd minute of 4 added on for Bedworth to complete the turn around when ironically enough the last man to score for The Greenbacks before the lockdown in March popped up again.  A ball into the box found Richard Blythe 2 yards out who prodded the ball into the net and sent Bedworth supporters home happy and leave The Greenbacks sitting second in the league table before the enforced break.

Man Of The Match:  Luke Rowe had a hand in all 3 goals and kept Bedworth in the game at 2-1 down with a goal line clearance.

Football is back
Scroll to top