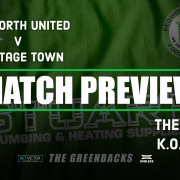 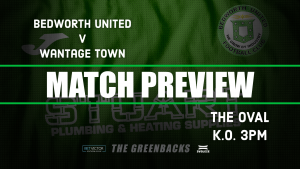 Saturday Bedworth host Wantage town, Wantage have had an extremely poor start to season after being promoted to the Southern League after winning the Hellenic League Premier Division last season.  New management duo Tom Austin and Matt Biddle who were appointed in the summer after the departure of Ben Sadler have found the going tough with a 0 point return from their first 7 games and shipping an average of 4.7  goals a game.   Not only have they found it hard work keeping goals but they have also struggled at the other end of the pitch having only scored 2.  Having shipped 9 last week away to Thame United Wantage will be desperate for a performance to put that result firmly behind them.

Bedworth go into the game after a 2-1 loss to Halesowen on Tuesday night where luck wasn’t on their side losing goalkeeper Dan Crane in the first couple of minutes to a badly dislocated thumb leading to Mitch Piggon going between the sticks who made himself a favourite of both sets of supporters on the night only conceding one goal.  Bedworth will also be without the experienced Tom Sharpe who is still suffering from a knee injury.  Lewis Chester who made a brief appearance from the bench on Tuesday and had been suffering with illness has now fully recovered and will be available.

This game could be turning point of the season for Bedworth whose start has been difficult having to play both sides who were relegated along with themselves last season. Last seasons defeated play off finalists and one of the play off semi finalists from this league it was always going to be a hard start and with Bedworth’s history of being slow starters it was always going to be a tough first 6 games.  Now that the storm has been weathered hopefully The Greenbacks can start to build a run of results, raise confidence and keep pushing upwards at this early stage of the season a win today will lift them into mid table still with a game in hand against some of the teams around them.  The management team of Stu, Jamie, and Andy saw a lot of positives in the midweek game and are looking to build on them Saturday.  I had a chat with Jamie he said “Even though Wantage on paper look like they are struggling results in this league have already proven that on any given day anyone can beat anyone and we will not be allowing the lads to be complacent and will be fully preparing them for the game as if it was against opponents higher up the table, Selection is getting more difficult each week with some players staking claims whilst others are slightly under performing at the level we know they are capable of so changes will inevitably have to be made”