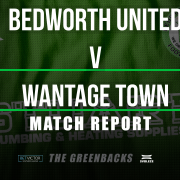 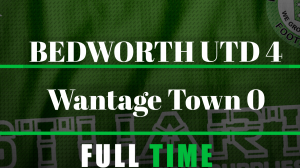 Bedworth United went into the game with only the injured Tom Sharpe missing, Dan Crane was passed fit to play after his dislocated finger received the previous Tuesday.

Wantage searching for their first points of the season set up to frustrate the home side with 2 well organized banks of 4 and were happy for Bedworth to have the majority of possession in their own half which Bedworth happily accepted in a first half devoid of real chances Bedworth were giving their opposition the run around but could not deliver the killer punch.  Bedworth had a few half chances but nothing clear cut, meanwhile apart from a couple of corners and one free kick Dan Crane had very little to do as Wantage were happy to play long ball and look to feed of flick ons from their big number 9 but the back 3 of Preston, Parrott and Punter were equal to everything dropped on them.  The first half ended goalless with Wantage probably the happier of the 2 sides going in at half time as their game plan of not to concede seemed to be working.

Bedworth made 2 changes at half time bringing on Chester and Rowe to work the already tiring Full backs of Wantage Town within 15 minutes it was a Rowe cross that was met by the head of Piggon that eventually broke Wantage hearts,  after an altercation between Blythe and Hartley which saw the Wantage player lucky to stay on the pitch after aiming what looked like a headbutt at Blythe Crane quick thinking pinged a free kick quickly out to Rowe on the left who took a touch delivered an inch perfect cross to Piggon who met the ball and managed to place a great header past the despairing Wantage keeper.  The first goal was always going to be important and for greenbacks fans it was a sigh of relief when it came, like buses though one came and the second wasn’t far behind when 3 minutes later Piggon broke free of his man and shot from a tight angle, the Wantage Keeper managed to save it but only palmed it out to the waiting Bailey-Nicholls who pounced on the rebound and blasted the ball into the empty net. From then on there was only going to be one winner.  Bailey-Nicholls added his second and Bedworths 3rd on 68 minutes when Chester turned the Wantage left back inside out and played a sliderule pass inbetween the fullback and centrehalf which Bailey-Nicholls ran onto and finished well with his right foot to bury the ball just inside the far post.  Bedworth now in the driving seat looked to close out the game by keeping the ball but there was time for Bailey-Nicholls to walk away with the matchball and complete his hattrick when a ball flicked on by Troke saw Bailey-Nicholls beat the offside trap and one on one with the keeper with his confidence high put the ball through the keepers legs to secure Bedworth the points and heap more woe on Wantage.

Listen to what Andy Penny had to say after the game