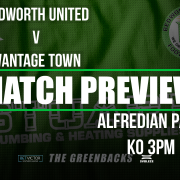 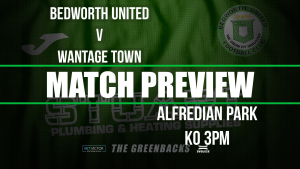 Bedworth travel the 81miles into Oxfordshire on Saturday to face botom of the league Wantage.  Wantage have struggled this year after gaining promotion last season and have only picked up 3 points all season with that being a 1-0 win against North Leigh at the turn of the year.  Wantage have conceded 99 goals so far this season so Greenback fans will be looking to see if we can score the 100th.  Wantage last time out lost 6-0 to high flying Berkhamsted and previous to that The Freds as they like to be known lost 2-1 at home to thame and 5-1 at home to Welwyn Garden City.  I am sure Greenbacks fans have a bit of sympathy for Freds supporters as Bedworth were not far off the same position last season. Wantage supporters though can take some joy in that they have seen more goals this season than any other teams followers an average of 4.8 goals a game.

Bedworth go into the game on the back of a 3-1 loss to Dunstable, after flying out the blocks and taking a 2 minute lead they were pegged back on the stroke of half time and then went behind on the hour mark and then conceded deep into injury time to cap off a bad day at the office for the Greenbacks. Stu Storer made his players sit through the video of the game befor they trained on tuesday and hopefully a picture paints a thousand words and mistakes can be rectified. The Greenbacks way back in September beat Wantage 4-0 at The OVAL with all 4 goals coming in the second half 1 for Mitch Piggon and a hatrick for the now departed Khaellem Bailey-Nichols. Bedworths coaching staff will be making sure that the Greenbacks go into this game as prepared as they can be as this time of the season these are the type of games that can derail a play off push. With Wantage playing on grass and the anticipated weather in Oxfordshire please keep an eye on the clubs official twitter account for up to the minute updates should the weather have its say. I am pleased to say that there will be highlights back for this game after missing the Dunstable game due to technical issues we will now be back and the youtube channel will have highlights of the game.

Useless fact: Alfredian means associated with, or characteristic of King Alfred the Great, his writings, or his language.