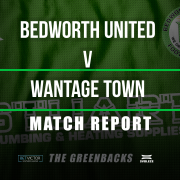 The Greenbacks travelled the 80 odd miles down to Wantage to face a pretty much unknown entity,  The Wantage side who were last years whipping boys in the league were much changed and that was highlighted by their impressive 2-0 opening day victory over Welwyn Garden City.  Bedworth travelled with a few names missing and named 2 U21 players in Jack Wells and Jack Bent on their bench.  With Luke Rowe also feeling a twinge just before kick off it was starting to look it was going to be one of those days for Bedworth.

The match started with most of the play in the Wantage half,  Within the first 5 minutes Bedworth could in other circumstance been 2 goals the good, Firstly Mulders with a free kick which Middlehurst claimed at the second attempt and then a Wantage were saved by the crossbar when a corner was met by Parrott who’s header thundered back off the woodwork.  It didn’t take long though for the Greenbacks fortunes to change when a ball from the back over the top of the Wantage defence played by Mulders looking to find Piggon turned Webster who inadvertently in his haste to clear the ball only succeeded in lobbing Middlehurst in the Wantage goal, who could do nothing but watch the ball nestle in the net behind him.  The goal seemed to lift both sets of players with both teams looking to get on the front foot Wantage came close to equalising when Alexander got free from a corner but put his header wide of Cranes goal, The Greenbacks had another chance from a corner themselves when the ball flashed low across the Wantage 18 yard box and bounced off Walton agonisingly over.  It was The Greenbacks though who doubled there lead with some good interplay from Walton and Piggon who finds John who burst into the box and buries the ball past Middlehurst to put the Greenbacks 2 nil up.  Piggon did have the ball in the back of the net again but this time Wantage were saved by the Linesmans flag.  into injury time in the first half Mulders again played the same ball that proved so dangerous for the own goal and nearly got the same result when tyhe ball flicked off the Wantage defenders head but this time went out safely for a corner to Bedworth.

Bedworth came out in the second half with more attacking intent but it was Wantage who got their name on the score sheet next when from a Bedworth corner they broke and the ball found its way to Knight who lobbed Crane to make the score 2-1.  Wantage then tried to turn the screw and Bedworth came under a bit of sustained pressure for 10 minutes but The Greenbacks defence held firm and never really looked troubled. With just over 10 minutes on the clock it was Bedworth who made the points safe in slightly controversial fashion, when John won the ball out on the right hand side leaving the Wantage player down holding his head John found Keen who’s low cross into the box was met by Dawson to prod home Bedworth’s 3rd of the day and secure all 3 points.  The Wantage bench protested but the referee stood firm on his decision.  Bedworth then gave a debut to Under 21 Player Jack Bent, Bedworth could have added a forth had it not been for a full length save from Middlehurst to tip a Blythe shot round the post to keep the final score at 3-1

Man Of The Match  Jorrin John,  Worked tirelessly for the team and had a hand in 2 of the goals scoring 1 and winning the ball for the second