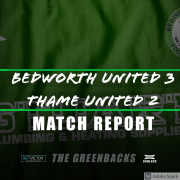 Stu Storer made 2 changes to the team that beat Barton Rovers on Tuesday night in came Kyle Barnett and Luke Keen with Ricardo Dudley absent and Sam Walton moving to the bench.  Bedworth supporters were dished up a feast of football on Tuesday night and they could have been forgiven for thinking that they wouldn’t see a game the same this season let alone in the same week.

The first few 15 minutes saw both teams feeling their way into the game with neither goalkeeper being tested. Thame though did have 2 shouts for penalties waved away by referee Kurt Bartlett.  On 18 minutes though it was the Greenbacks that would break the deadlock.  Rich Blythe lofted a clever ball through to Mitch Piggon who gladly accepted the chance to lob Rackley in the Thame goal to put Bedworth 1 nil up,  It wasn’t long after that things went from bad to worse for Thame when Joe Wylie kicked out at Reece Blackmore and referee Bartlett had no hesitation in showing the red card.  This put Thame down to 10 men and a goal behind but this seemed to galvanise the visitors and on 36 minutes they equalised through a well took Harry Mepham free kick.  Thames fortunes then got even better when after a long ball Ryan Blake found himself one on one with Crane and duly slotted the ball past him to send the visitors in at half time 2-1 to the good.
Half Time Bedworth United 1 Thame United 2
The visitors lead didn’t last long though as 3 minutes after the break Piggon again found the net after good work from Dawson on the left wing to get free he swung a cross into the box and arching his back Mitch Piggon directed his header past Rackley to level the score at 2 each.  With Bedworth a man to the good they pushed forward for the winner but were being met by a resolute defence from Thame.  Thame had chances on the break to take the lead again but could not get past Crane in the Bedworth goal. Things then got even worse for the Oxfordshire side when Mapley already on a yellow card for an earlier foul on Dawson brought down Blythe in the midfield and recieved his second yellow. This left Thame with 9 men for the final fifteen minutes. Bedworth’s pressure eventually paid off when a Mulders corner was met by a bullet header by Kyle Barnett for his first goal in a green shirt. Thame did break free in the final minute but Dan Crane stuck out his left foot to prevent a certain goal from Lynton Goss.  Bedworth held on through injury time to keep all 3 points at The OVAL and maintain their unbeaten start to the campaign so far.  One thing that can’t be said about the Greenbacks so far this season is that you don’t get entertainment for your admission fee, 2 games 12 goals 2 red cards and 6 points what more could a Greenback supporter want.
Full Time Bedworth United 3 Thame United 2

Man Of The Match  Mitch Piggon for his brace and work in holding the ball up.