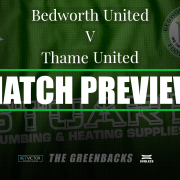 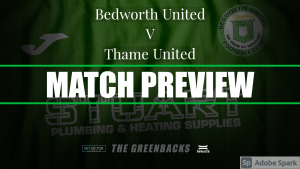 Bedworth host Thame United on Saturday with The Greenbacks sitting top of the pile after 3 games.  Thame have had a mixed start to the season having won 1 game lost 1 game and drew 1 game.  They started their league campaign after going out to of the FA Cup to Kidlington the week before with a 3-0 home victory against Bedford Town. That was followed up by a 2-1 loss away to Didcot Town and most recently a 0-0 draw away against North Leigh on Tuesday night. these results see them sitting 6th in the table with a total of 4points at this early stage of the season.  The Greenback only faced off the once against Thame last season before the league was curtailed It was at the ASM stadium and Bedworth ran out 2-1 winners through 2 goals from the now departed Bailey-Nichols and Troke.

Bedworth will be looking to add another 3 points to their early season form,  After a battling 1-1 draw against St Neots, a well earned win against Wantage and a very entertaining game on Tuesday night,  where they came out victorious by the odd goal in 7 against a tough Barton Rovers side left The Greenbacks top of the pile looking down at everyone else.  Stu Storer has added to his squad this week with the signing of Connor Deards who will be eligible to play tomorrow.  Stu Storer will still be without the suspended Liam Truslove who will be serving his final game of a 3 match suspension after his red card against St Neots on the opening day.  Speaking to Stu Storer earlier today he said “League positions don’t mean a thing at this stage of the season but it is always good to have points on the board earlier to use as a springboard for the rest of the season. With only 4 points between us last season when the league ended it shows just how close the 2 teams would have been.  I am sure tomorrow will be a tough game and Thame will be looking to build on their results as we are but I am confident if we perform to our full ability we will be very difficult to beat.  The togetherness in the squad is very much evident and the feeling of unfinished business from last season is a great motivation for them to perform”

Admission:  Adult £10, concession £7, Children under 13 accompanied by an adult Free