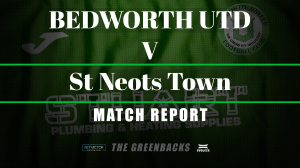 Bedworth travelled into Cambridgeshire to take on St Neots in the saints first game under the new management of Barry Coor.  Bedworth kicked off against a strong wind.  The first few minutes of the game was back and forth with neither team really imposing themselves on their opponents both teams seemed to struggle with the wind.  St Neots were looking to use the wind in their favour launching long throw ins into the Bedworth box whenever the opportunity arose, Bedworth though were equal to all that was literally thrown at him with the back 3 of Parrott Dudley and Preston winning most things in the air.  The wind though did have a say in the opener when a Dan Crane clearance got caught in the wind and blew back and out of play for a St Neots throw the throw was initially cleared by the diving head of Templeton but the ball fell kindly to Smith who’s first time cross was met by the head of Prince  Mutswunghuma who snuck in between Parrott and Preston to head powerfully past Crane.  St Neots lead though only lasted just over 10 minutes when a ball forward was flicked on by Piggon to Rowe who although was fouled managed to flick the ball to Keen,  Piggon had continued his run and picked up the return which looked to have sent him to wide for a shooting chance but Piggon had other ideas coming back inside and firing the ball right footed past the helpless Finley Iron in the St Neots goal.  Coming towards halftime it looked as if the teams were going to go in on level terms but on 43 minutes a moment of class from Luke Keen in his first start since his return, picked up the ball from a through ball from Truslove controlled it well looked up saw the keeper advancing to close him down and cool as you like dinked the ball past Iron and watched as if in slow motion his effort sneak just inside the far post to send the Greenbacks into the break a goal in front.

Bedworth came out in the second half and looked to take the game to St Neots spending the first 15 minutes probing looking for the killer third goal and looked the most likely to add to their tally but when Iron claimed a Bedworth corner corner and tried to start St Neots on the break quick Templeton decided to take a booking for the team bringing down the man with the ball to slow the break and duly saw the yellow card waved in his direction. Within 5 minutes Templeton saw the yellow again when a little tug back was seen by the referee who had no option but to then show the red.  This saw Bedworth changes happen with Piggon first and then Keen being replaced by Troke and King. The game then turned extremely scrappy with the referee showing a few more yellows as St Neots pushed forward looking for the equaliser. Sutton Was lucky not see red when he appeared to raise his forearm into the face of Troke but the referee showed him just a yellow after a long discussion with his linesman. Bedworth rode the storm and defended like their lives depended on it.  Crane was forced into a save late on when a deflection of Dudley looked to have him wrong footed but the veteran stopper was quick to adjust his feet to keep it out of the net. With 4 minutes of added time to play it looked like St Neots might have been given a lifeline when they were awarded a free kick just outside the Greenbacks box.  Crane wasn’t even tested as the ball flew high and wide of the Bedworth goal.  Bedworth held out and took all 3 points back to The OVAL.  After playing for 1/2 an hour with 10 men and defending as if their lives depended on it they fully deserved to take the points

Man of the Match  Blythe

Please watch below for highlights

The Chairman speaks
Scroll to top