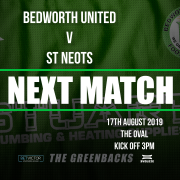 Saturday sees us welcome St Neots town to The OVAL for our long awaited first game in the Betvictor Southern Central Division 1.

St Neots along with our Preliminary round FA cup opponents Halesowen were also relegated from the Central Premier league so Saturdays game is going to be a tense affair with both sides wanting to start the campaign with 3 points.

Bedworth who had an extremely competitive internal game last Saturday will be dying to get into competitive action, the mood around the camp is good and after the bonding night out they had after Saturdays game the squad have a look of togetherness and are as ready for the season ahead as they could be.

Stuart Storer will have a full squad to pick from with recent signings Khaleem Bailey-Nichols, Cal Templeton, Prudence Anaele and Keegan Wooley available to play. There is healthy competition for a starting place in the first 11 and whoever is selected will know that they have to perform as there are others waiting in the wings to take their shirt.

This season we want to make The OVAL a place where opposition players will dread coming to the players can only do that with your support so make some noise bring a friend and support your local club.