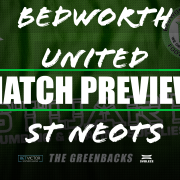 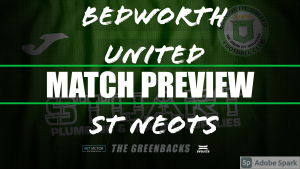 Bedworth take the trip down the A14  to St Neots in a reverse to the start of last season when Bedworth hosted The Saints with the points being shared with the end result being a 0-0 draw.   The reverse fixture saw Bedworth run out 2-1 winners thanks to goals from Mitch Piggon and Luke Keen,  The Greenbacks played the last half hour with 10 men after Cal Templeton saw red for 2 yellow cards.

St Neots have already played 1 more competitive game than the Greenbacks after entering the FA Cup in the Extra Preliminary Round where they beat Pinchbeck United from the United Counties Premier Division 4-0 unfortunately for The Saints though last Saturday saw their FA cup dreams ended when the lost 3-2 to Soham Town Rangers from the Isthmian league North Division.

The Greenbacks first competitive game of the season ended in a 1-1 draw in the FA Cup preliminary round against Racing Club Warwick but emerged victorious after Dan Crane’s heroics during the penalty shoot out saw him save 3 out of 5 to set up a tie against Barwell in the next round.   Bedworth have a full strength squad to choose from with the only doubt being Blaize Punter after he limped off on the stroke of half time at Racing Club.

When I caught up with Stu Storer earlier today he said “Both games against St Neot’s were tough last season with us drawing one and winning one by the odd goal,  I can’t see it being any different this season.  Jamie, Andy, Brights and myself have prepared the lads to the best of our ability and now it is down to them to put that preparation into action.  After losing in the cup I have now doubt that St Neot’s will be looking to bounce back as soon as possible, there is nothing more dangerous in football than a wounded animal.  We are determined to get off to a good start this season but the fixtures and draws haven’t been kind to us seeing us having to travel for our first 3 matches.  On a side note I am sure I can speak on behalf of all associated with Bedworth United officials and supporters alike in in offering congratulations to Luke Rowe and Dani on the arrival of their new baby”