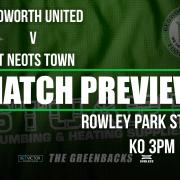 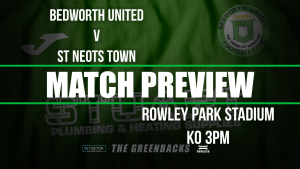 Bedworth travel into Cambridgeshire on Saturday to face St Neots.  Bedworth faced St Neots in the first game of this campaign at The OVAL, neither team could break the deadlock on that day and played out a 0-0 draw.

St Neots after relegation last season have struggled this season as well only picking up 14 points so far and sitting second from bottom of the league with only Wantage below them.  Their record doesn’t make for great reading with 4 wins 2 draws and 13 losses from their 19 games.  2 of those wins came over the Christmas period with a 2-1 win away at Bedford on Boxing day and a 5-1 demolition of Kempston on New years day.  Unfortunately for The Saints that little winning run was halted last Saturday by Yaxley who beat them 3-2 away.  Barry Corr has recently been appointed as manager, as St Neots look to further their connection with Cambridge United with Barry being both St Neots manager and carrying on his role as Cambridge Uniteds Development Coach.  No doubt St Neots squad for this game will be bolstered by a few young loan players from Cambridge United.

Bedworth come into the game on the back of a scrappy 3-2 win at The OVAL against Barton Rovers, after going 3-0 up in the first 20 minutes they rode their luck in the second half and held out to keep all 3 points at The OVAL which saw them climb into the top half of the league.  That result made it 4 wins out of 6. The Greenbacks have defeated Barton Rovers, Daventry, Yaxley and Kempston Rovers during that time with the only 2 defeats coming at the hands of Coleshill (With some help from the officials on the day) and away to promotion favourites Halesowen.  Bedworth should fingers crossed be travelling with a fully fit squad with the only doubt being Khaellem Bailley-Nicholls after picking up an injury on New Years day.  A win for Bedworth will firmly put them in the hunt for one of the coveted playoff places come May.