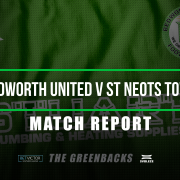 Stu Storer made some changes from the team that drew 1-1 with Dunstable last Saturday.  Andrew Walklate came in to replace the absent Dan Crane, Ishmael Dawson dropped to the bench to be replaced by new signing Philip Bilson.

The first half was a half of few chances with there not being much goalmouth action and neither side really testing the opposition keeper.  Bedworth had a few half chances but nothing really to write home about. Bedworth were having the majority of the ball but could not find that final ball to produce a meaningful chance.  Things started to go downhill though for the Greenbacks when Keen limped off to injury within 20 minutes. The best chance of the half did fall to St Neots when a ball bobbled around the Bedworth area and was eventually struck goalwards but blocked by new boy Bilson.  With time ticking down to the break it was St Neots though that broke the deadlock when Bilson was adjudged to have tripped Worman in the Greenbacks area with a minute of the half left. Robbins made no mistake from the spot sending Walklate the wrong way to put St Neots in front.

Bedworth started the second half on the front foot and looked like they had levelled when John had the ball in the back of the net but St Neots were saved by the linesmans flag in a decision that looked marginal to say the least.  Things then got worse for the Greenbacks when a St Neots player made a meal of a Blackmore challenge words were exchanged and from out of nowhere the ref was brandishing a red card much to everyone’s confusion.  Once things had calmed down it was made clear that the referee believed Blackmore had aimed words at him and was shown the red card for that.  The sending off though seemed to give the Greenbacks some fight and they soon equalised when Mitch Piggon broke the St Neots offside trap and from a tight angle blasted the ball high into the roof of the net to equal the scores.  The scores stayed level for less than 15 minutes though when Bedworth were caught short at the back the ball fell to Gomersall unmarked on the left hand side of the box and he arrowed a shot past Walklate to restore St Neots 1 goal lead. Within a minute that lead was doubled when a poor clearance from Barnett was picked up by Amu who fired the ball low into the corner of the net.  With Bedworth chasing the game and a man light there was always going to be gaps left at the back and with 3 minutes left to play Bennett this time found himself with the space to fire home to make the score 4-1 to St Neots.  It could have got even worse had Walklate not produced a fine save to stop a Gomersall effort from flying into the roof of the net.

Man Of The Match:  Rich Blythe 10/10 for effort when the Greenbacks went down to 10 men to try to keep Bedworth in the Trophy.

Tots get a Visit
Scroll to top