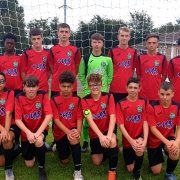 Bedworth started their inaugural season in the MJPL with an away trip to  Sedgley White Lions as it will be all season the Bedworth lads will be going into the unknown and we always knew that the first game was going to be difficult managing the boys nerves as much as their play.  The jokey banter in the dressing room even before the game gave away how the lads were feeling even though they were all putting on a brave face the nerves were showing.

The boys playing in their new away strip kindly sponsored by +US couldn’t have got off to a worse start finding themselves a goal behind within 30 seconds before they had even touched the ball, the game plan went out the window straight away as the lads started to chase the game instead of being composed like we know they can be the ball became a hot potato the midfield went looking for the equaliser but instead left gaps that Sedgley exploited and in the first 20 minutes the Bedworth lads were left stunned and were 5 goals down. It could have been a lot more had it not been for Harrison in the Bedworth goal pulling out some top drawer saves to keep the score down.  Kyle managed to get a goal back on the half hour but the first half ended with the lads 5-1 down and disappointed in the way they had started.

The second half was a much better showing with the lads in red keeping the ball a lot better and limiting Sedgley to only a couple of chances which yet again Harrison was equal to.  Bedworth tried hard to get back in the game but the Sedgely defence and keeper kept the lads at Bay pushing forward Bedworth were caught out and in the last 10 minutes Sedgley scored 2 more to make the score 7-1 and that is how it stayed.

Man of the Match for Bedworth was Harrison Martin if it had not been for some brilliant keeping the score would have been a lot more in Sedgleys favour and his distribution was brilliant.