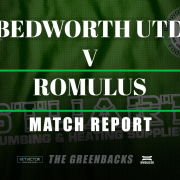 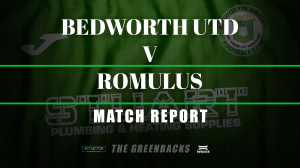 Bedworth started the game with a much changed line up from Saturdays win against Didcot, giving some of the U21’s a run out and some of the first team players from the Saturdays bench.  Bedworth started well with Jarred Bradshaw seeing a lot of the ball in the hole and looking to feed Piggon and Pryce up front.  It was Romulus though that had the first real chance of the game when a deep hanging ball caused confusion in the Bedworth back line but captain for the night Dan Crane was on hand to deflect it wide from close range.   Bedworth then took control and created a few half chances with Josh Steele being allowed a lot of space wide on the left he delivered a number of decent crosses that unfortunately no green shirt could get on the end of.  Bradshaw Piggon  and Pryce all had shots saved by Ganley in the Romulus goal and he was by far the busier of the 2 keepers.  Bedworth pressure eventually paid off after a mistake by McNulty allowed Piggon to close in on goal his shot was saved but like all good forwards Pryce was following up and blasted the ball into the empty net to give Bedworth a deserved lead. Romulus had a chance to equalise from the penalty spot after a foul in the box from Dudley on Colbourne.   Colbourne stepped up himself to take the penalty hit it low and hard to Cranes right but as in the Ilkeston game Crane was equal to it and pushed the ball wide for a corner.  Bedworth were still on the front foot and doubled their lead when Bradshaw put Piggon through again his shot was saved but Pryce was again on hand to bury the rebound. Bedworth then scored a third with seconds left in the first half a cross from Steele was met by the head of Piggon who duly put the Greenbacks 3-0 up going into the break.

Bedworth came out at the start of the first half looking to add to their tally both Pryce and Piggon having chances with Piggons long range shot taking a deflection and just bouncing off the top of the crossbar.  On the hour mark though Romulus started to play with Weale in the midfield starting to pull the strings for them.  Within 5 minutes they had levelled to game with 2 goals from Whelan and one from Weale himself.  Weales goal being a spectacular hit from fully thirty yards that arrowed past Crane giving him no chance.  Crane was trying his best to motivate his Troops but in the 71st minute Weale again found the net after a corner was cleared and hit the ball from the edge of the box to put Romulus in the lead for the first time in the game. Bedworth huffed and puffed looking for the equaliser but the game was sealed for Romulus in the 83rd minute when Whelan completed his hattrick and put the icing on the cake for Romulus.