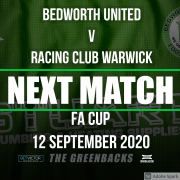 Bedworth travel the short distance to Racing Club Warwick in the FA Cup tomorrow in their first competitive game since March.  Racing Club who defeated AFC Wulfrinians 3-0  in the Extra Preliminary round to set up this tie have already played 3 competitive games this season winning 2 and drawing one, their last outing was on Tuesday night against Lye Town.  Warwick took a 4 goal lead but eventually ran out winners by the narrowest of margins eventually winning by the odd goal in 7.  This game could be called the battle of the Luke Rowes with both sides having a player of the same name in their squads, could cause a bit of confusion for any commentators out there.

The Greenbacks go into the game on the back of a very competitive pre season with their last game being a very good win away against a very good Barwell side.  Stu Storer has a full strength squad to pick from with no injury issues.  Speaking to Stuart Storer earlier today he said “I am anticipating a very tough game, not ideal that our first competitive game is in the FA Cup where upsets can happen, but the lads are well prepared and desperate to get back out on the pitch and play competitively.  A good run in the FA Cup can lift spirits around any club and we will be taking this game extremely serious as we look to progress to the next round”

CURRENTLY AS PER GOVERNMENT AND FA GUIDELINES SUPPORTERS ARE ALLOWED TO WATCH THIS GAME.  Should this change within the next 24hrs please we will let you know on our social media.